On the New Marvel Unlimited App

This past month, Marvel updated – and aggressively marketed - its Marvel Unlimited app, adding exclusive digital “infinity” comics that are optimized for phone screens. As a long-time subscriber to Marvel Unlimited, I did in fact download the update — and I have some thoughts.

First, beware: the new app is not compatible with all devices. While I had no trouble downloading it onto my phone, I’m now unable to use Marvel Unlimited on my Samsung 4. This is a bit of an inconvenience to me because, being an older lady, I now have trouble reading on itty-bitty screens. Keep in mind: according to the company’s website, the updated app will only work for Apple OS 11.0+ or Android 5+.

On my phone, the app loads well even on my rural internet — though there are a few bugs I’ve encountered. One, if you’re an established subscriber, it takes a few days for your existing library to be transferred. Two, brand new comics (particularly the infinity comics) don’t always load without errors, especially on their first day of advertised availability. Third, the library is now sorting by series instead of by issue, which, based on the Twitter chatter, has annoyed quite a few long-time users. And lastly, I’m not a big fan of the navigation set-up. The end pop-up for each comic does not include a direct link to “Library” or “Home,” which forces you to back-arrow several times to get back to the main menus. Maybe this won’t bother you at all, but I personally find it a little aggravating.

Now about the content: I don’t recommend you sign up for the new Marvel Unlimited just to get access to the “exclusive” infinity comics. I’ve read all of them, and they’re just not worth the extra expense if you don’t already have an account. Said comics are either completely safe and substance-free or they reach heights of moral inversion so horrifying that I, at least, wondered what the hell the creators were thinking when they were putting them together.

Take, for example, the most egregious offender of the bunch: “X-Men: Green,” issues #5 and #6 of the X-Men infinity comic. In this story, Nature Girl decides to avenge the death of a sea turtle – and environmental degradation in general – by stabbing a random grocery store manager in the neck with a pair of scissors. Yes, you read that right: Nature Girl doesn’t investigate the real reasons why plastic pollution in the ocean is a problem (like, for example, poor sanitation in China). Instead, she opts for ecoterrorism — and targets some working-class schlub who probably has little to do with his grocery chain’s bagging decisions.

“Is this a villain origin story?” you may ask. And yes, I wondered that too. Unfortunately, everyone else in the story (including Xavier and Wolverine) starts treating this little psychopath like she’s either a poor, misguided soul or – even more shockingly – a hero worth emulating. What the actual hell? These are not Chris Claremont’s X-Men. (Though, in fairness, those X-Men have been missing and presumed dead for quite some time.)

I could also spill quite a few words on the lazy and sinister Captain America infinity comic. In said "story," Cap is sent in to negotiate with and ultimately subdue activists who've taken over Independence Hall in Philly. Why does Travis, the antagonist, want to use this landmark building to pull off his evil plan to control the populace? Well, we can guess (Travis and his compatriots appear to be very-thinly-veiled allegorical representations of the 1/6 Capitol rioters), but we don't actually know for sure because the writer doesn't even bother to give Travis (and those perceived to be on his side) any real dialogue: 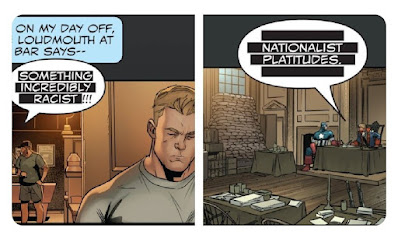 Here's a hint, Marvel: when you avoid the specific motivations of Cap's opponents in this fashion - when you fail to make clear what it is they think and why it's dangerous - you diminish Cap himself. If Travis is just a yokel whose ideas are utterly dismissible as "nationalist platitudes," then Cap really doesn't accomplish anything at all in defeating Travis' scheme. A great hero requires a formidable villain. (And no: allowing Travis to speak doesn't "give fascists a platform." Only idiot leftists who failed reading comprehension actually think this. Everyone else who's not a baby-brained imbecile understands that what the villain says is supposed to be wrong. Jesus fucking Christ.)
But the fact that the writer picks an obvious target and outright refuses to develop his villainy in any real sense isn't even the worst aspect of this comic. No: that comes at the end, after Cap has stopped Travis and is brought before the government to explain why he destroyed the Liberty Bell in the process: 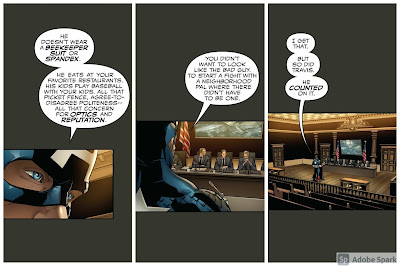 The lecture Cap delivers here basically encourages these politicians - and the reader - to be suspicious of and confrontational with the guy next door. Our real enemy, Cap says, is our fellow Americans. Other parents cheering in the stands at your local soccer game? They're possible monsters. The mom behind you at the ice cream stand? Don't trust her; she could be a threat. Allow me to be quite blunt: this is evil. This is misusing Cap to gin up further political polarization -- and maybe even foment civil war. And the true Cap would be absolutely appalled.

Suffice it to say that these infinity comics do not represent Marvel’s best. To find those, you should hit the app’s extensive back catalogue — i.e., the reason I signed up for Marvel Unlimited in the first place. At $9.99/month, this subscription is a bargain-basement way to catch up on comics from decades ago. And if you’re willing to wait for three months, you’ll eventually have access to the new comics too.

Email ThisBlogThis!Share to TwitterShare to FacebookShare to Pinterest
Labels: comics

Drop a Dollar in the Hat!

The Right Geek
The Right Geek has been an active fan of science fiction for decades - ever since her father started handing her Heinlein juveniles to read - and a fan of comics since 2008. She is also Catholic and conservative-leaning, so her writing on all things geeky will likely be colored by that perspective.